iMovie VS LumaFusion on iOS – Which Mobile Editing App Do You Really Need? 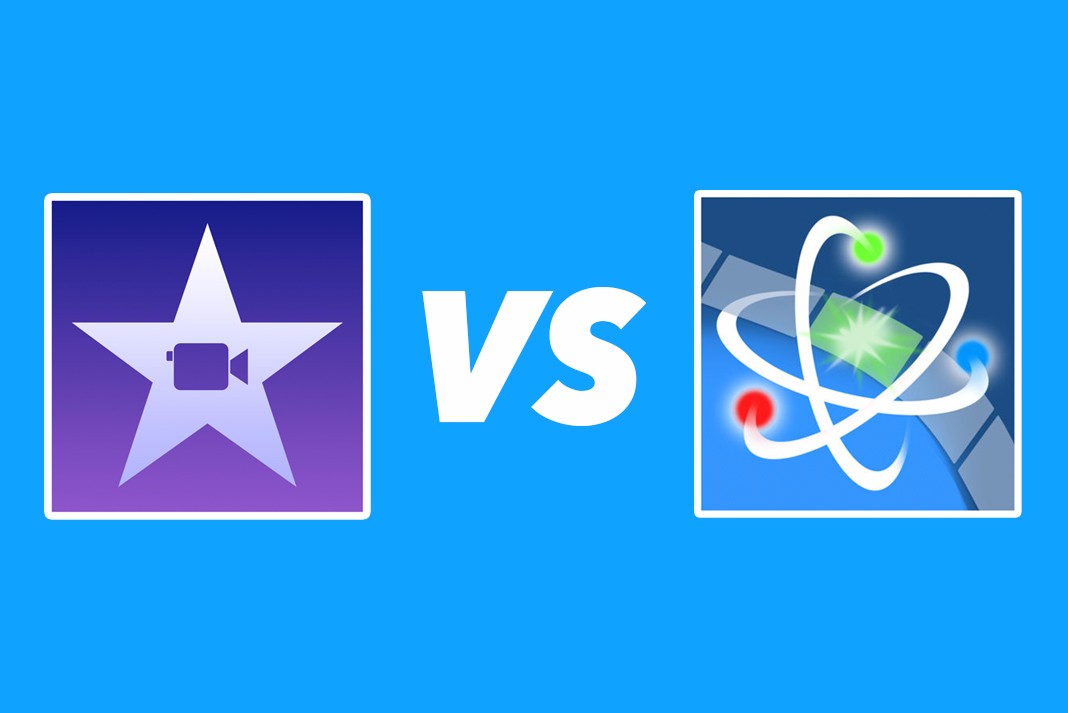 iMovie VS LumaFusion - Which Mobile Editor do you Really Need?

LumaFusion is without a doubt the first (and currently only) professional video editing app to come to the iPhone and iPad, and as a result it generated a huge amount of buzz upon its release in late December 2016. It supports multi-track editing, audio mixing, video key-framing and much more; truly an impressive offering and without a doubt the best new app released in 2016.

At just $20 USD (currently 50% off! - get it now before price increases), it is great value for money, but definitely on the higher end of iOS app prices, and as a result it has many people asking: do I really need LumaFusion over iMovie: Apple’s free mobile editing app available on iPhone & iPad?

This is a tricky question, because on the one hand it is entirely subjective as both apps can produce stunning content in 4k, and both have their strengths and weaknesses. Personally, I still use both! LumaFusion is incredibly powerful and my go to app for serious projects, but iMovie wins when it comes to ease of use and simplicity of interface (which it achieves by doing a lot less than LumaFusion, but in many cases, doing it more elegantly).

Having created in-depth training series for both LumaFusion & iMovie I feel the best way to help answer the LumaFusion VS iMovie question is to simply lay out a feature comparison, as it really comes down to what functionality you require.

Let’s start with why you would want LumaFusion over iMovie. 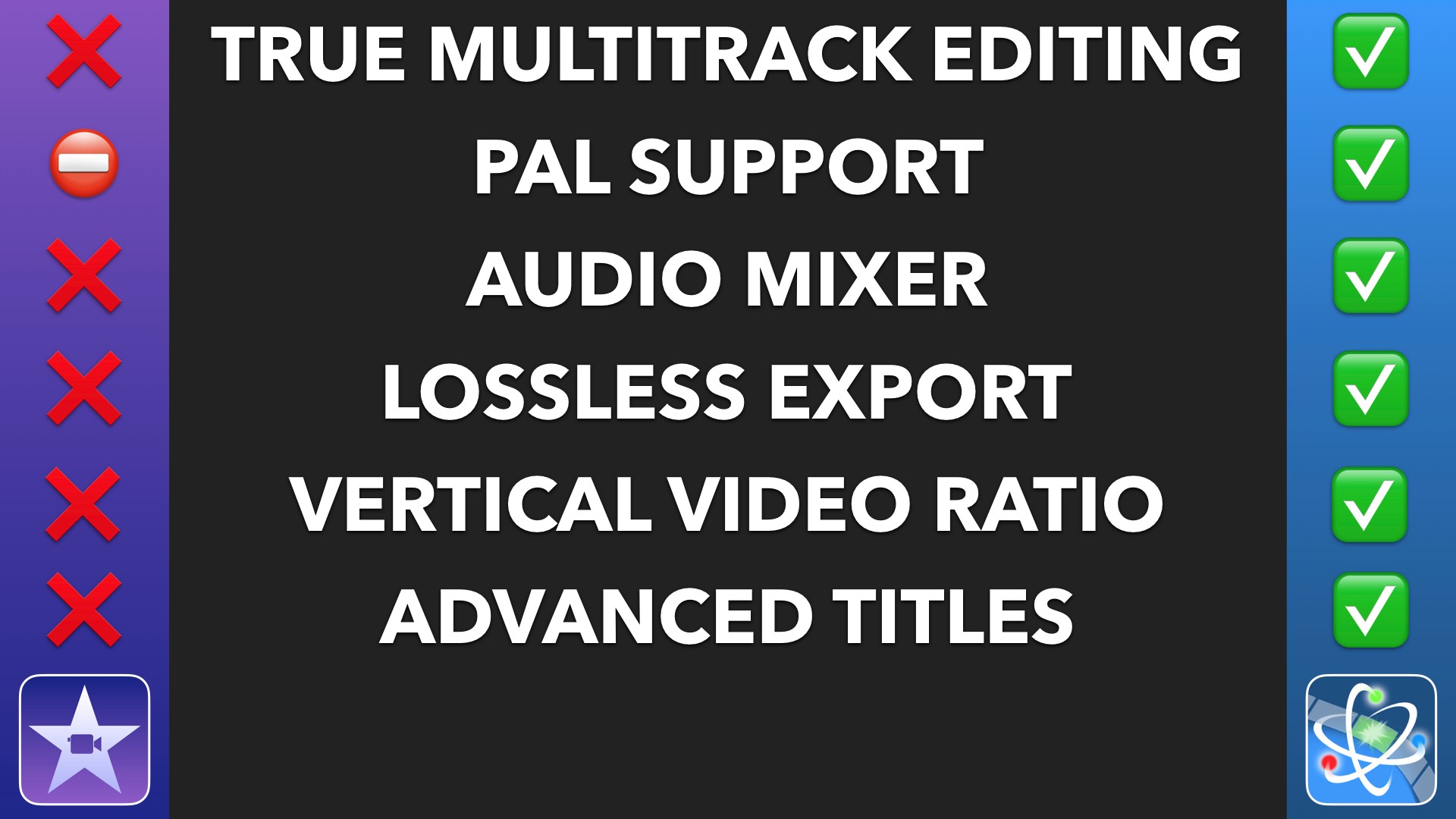 As you can see, amongst LumaFusion’s many killer features is a true multi-track editing experience; full support for PAL at 25 frames per second upon export; a fully featured audio mixer; lossless export that won’t heavily compress your video (unlike iMovie); support for vertical video making this ideal for Snapchat stories etc; and perhaps most importantly advanced title creation tools.

If you need just one of those features, then LumaFusion is the obvious choice. You’ll notice the red circle graphic next to Pal Support for iMovie. This is because there is a workaround using iMovie for the Mac which I cover in The Epic Guide to iMovie – but the point is, you still need a computer to do it which isn’t a great option for many.

But what about for basic editing?

This is where the gap isn’t as wide as you might think because iMovie does a respectable job when it comes to being able to easily perform the most common types of editing techniques. Take a look: 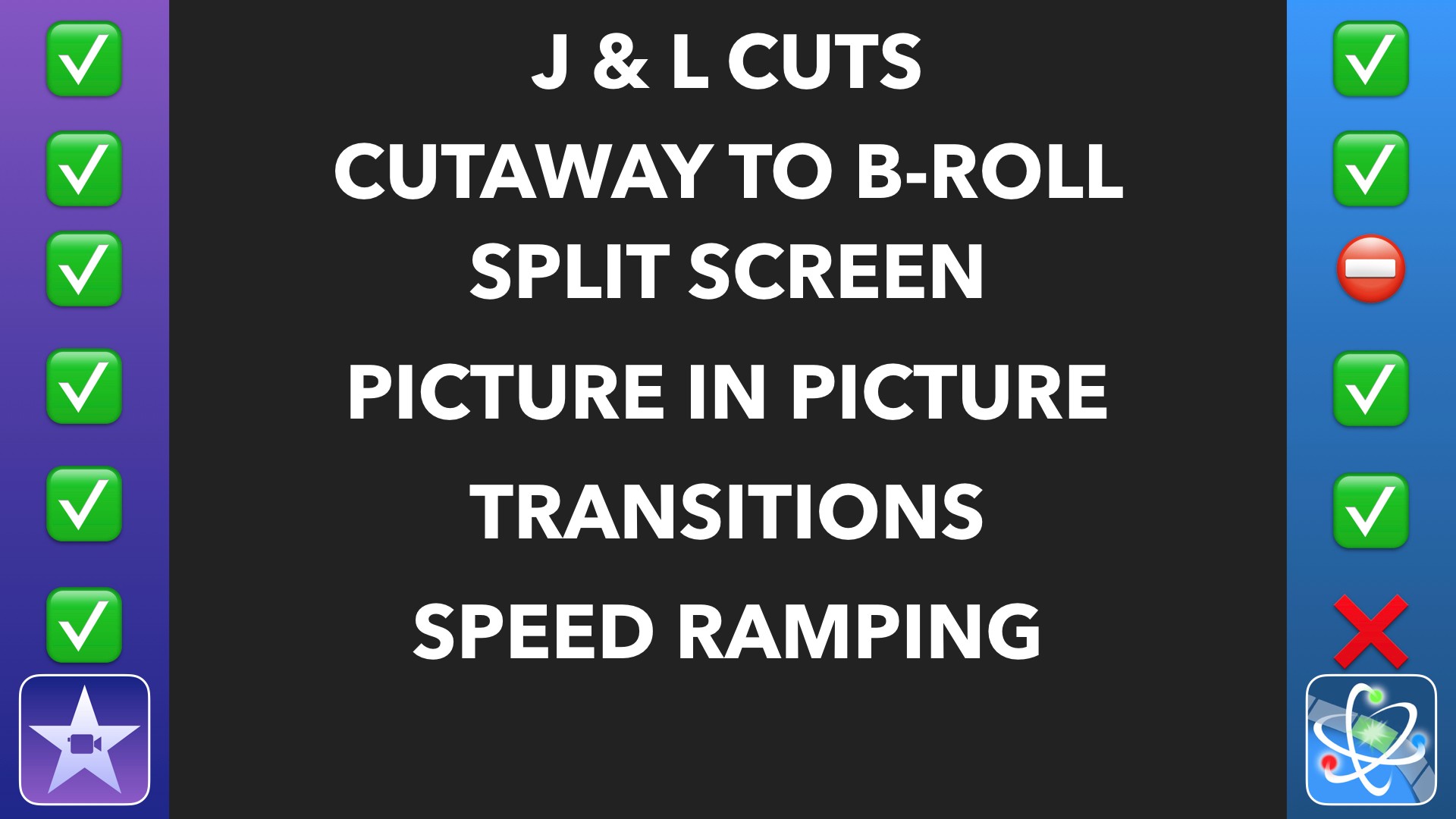 As you can see iMovie even does a couple of things that LumaFusion currently doesn’t do, including true split-screen (LumaFusion lacks a crop function to do this properly as of writing – you simply have to loose half of your frame) and speed ramping. No doubt these features will be coming to LumaFusion in a future update, but right now iMovie will have you covered.

And for colour grading, fx and more advanced features? 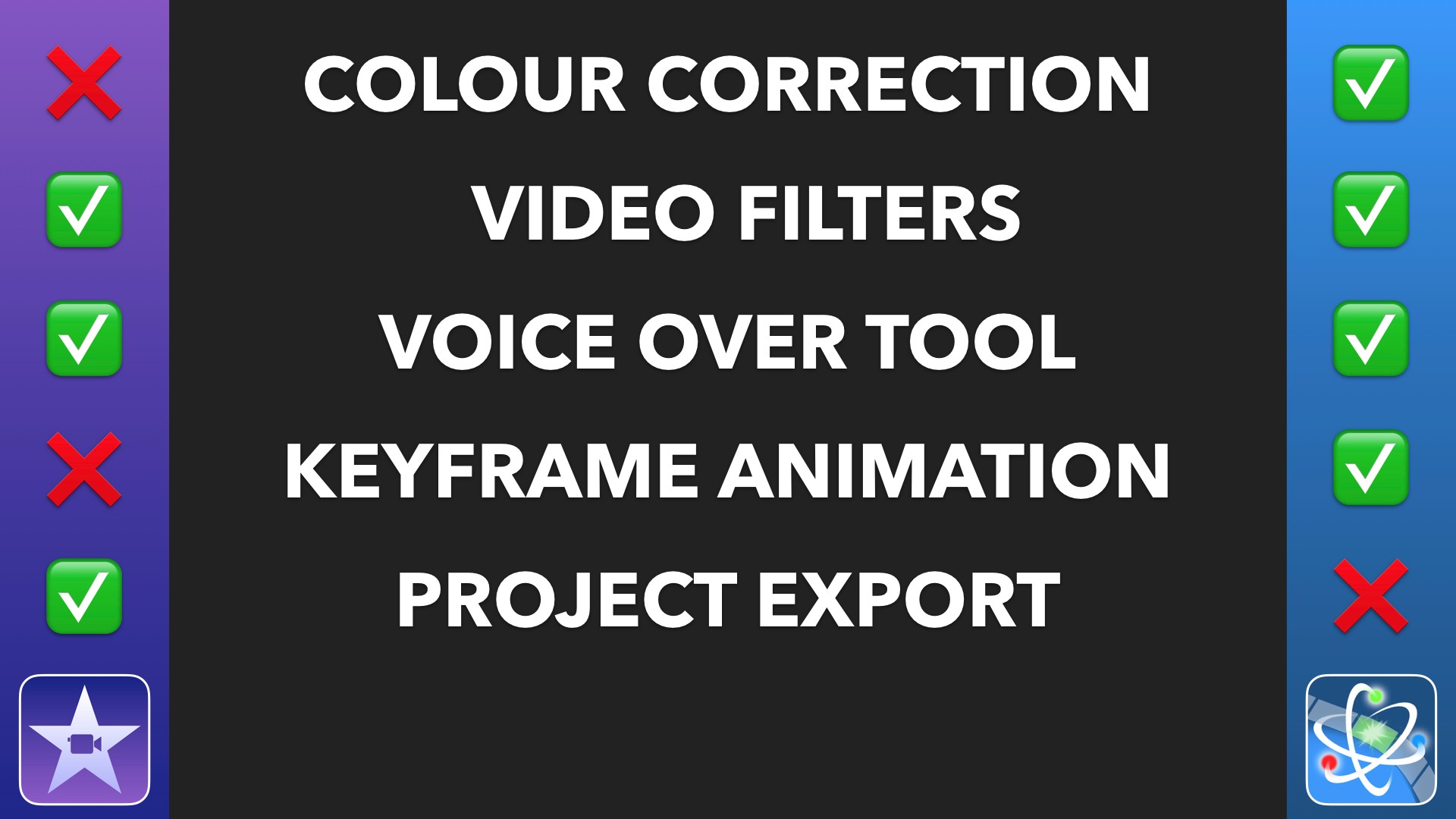 Well LumaFusion wins again, except for one major feature: the ability to export an entire project, whether that be for backup purposes or to edit on another device.

The beauty of iMovie for iOS is that you can export your project and send it to another iOS device and effortlessly resume editing. You can even move it over to iMovie on the Mac or even Final Cut Pro for finishing! Everything is exactly as it was on the device you created it on.

Note however that this is a planned feature update for LumaFusion, but right now it doesn’t exist. If you want to be able to move between devices or send your edit back to the newsroom to be finalised before broadcast, iMovie is your only option.

LumaFusion’s colour correction and keyframeable effects are incredibly powerful and make it the best option for advanced colour grading and and even motion graphics.

Side by Side – here’s how they compare 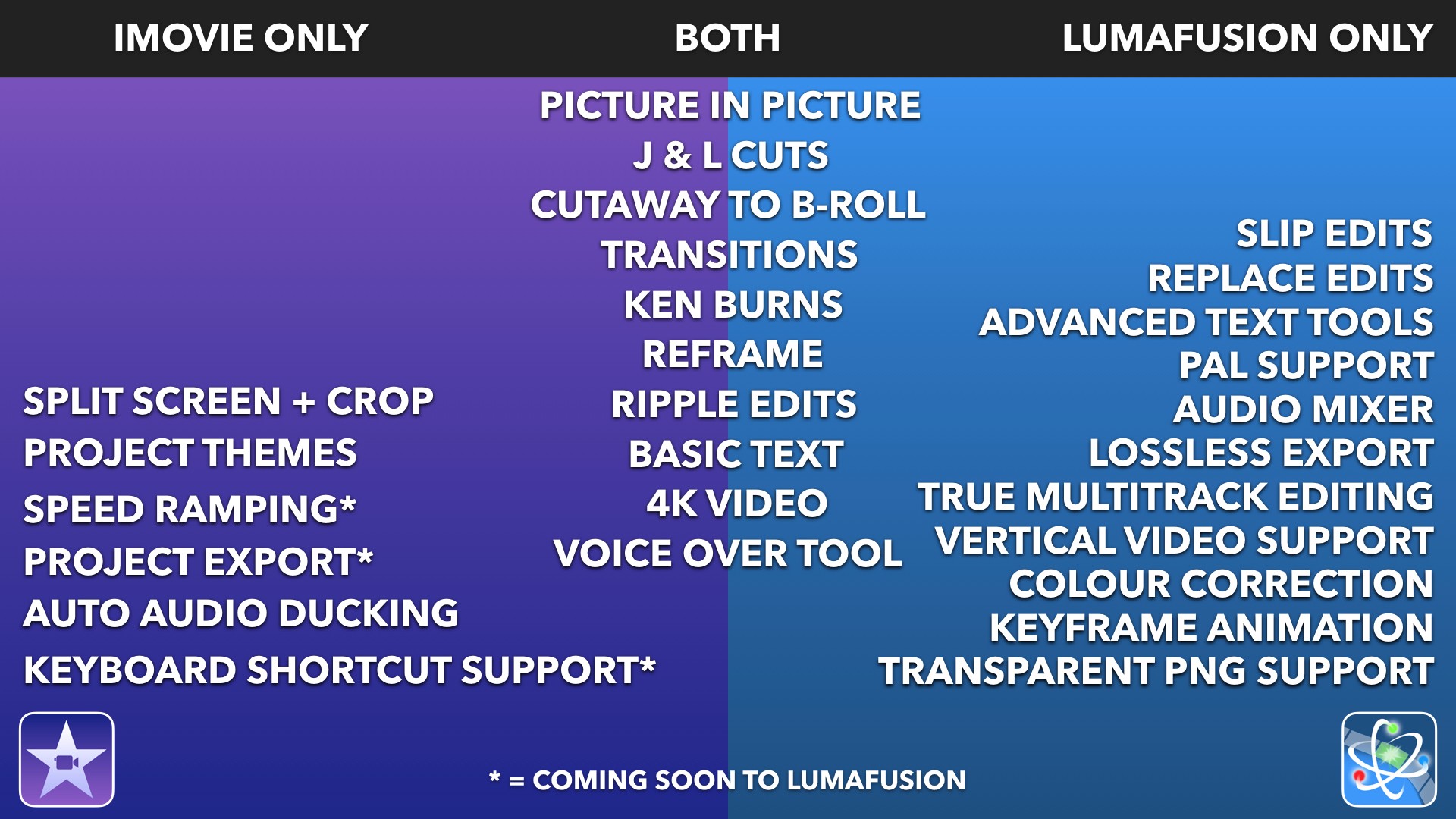 This I hope gives you an overview of what is unique to each, as well as what they both do well. You can see another iMovie exclusive is Auto Audio Ducking. This will automatically reduce your background audio track (typically music) whenever there is sound on your primary track (typically dialogue). A really great feature. However LumaFusion offers complete manual control over the audio levels via keyframes making it the better option for pro results, but does require more work.

There is no doubt that LumaFusion is the more powerful video editing app and the best currently available on iOS. The features planned for later inclusion are mind blowing and in a years time, it will be like having Premiere Pro or Final Cut X on your iPhone or iPad (it’s not far off right now).

As to whether you need it, that will be a no-brainer for you when you look at its unique feature set (see above). Either you need one or more of its many exclusive features, or you don’t.

However it still doesn’t necessarily replace iMovie for iOS either, which comes free with all modern iPhones and iPads. iMovie is very capable if you can live with 30fps export (or have a Mac handy) with a max bitrate of 25Mbps which is fine for web and broadcast. It is still the best designed interface of any mobile editor and easy to use in Portrait or Landscape modes with just one hand. In fact in 2013 I edited a feature length series on it, and its come a long way since then!

Even though LumaFusion is my editor of choice, I love the speed and ease of iMovie and still use it for simple projects, and I’d love to hear your thoughts in the comments below or via Twitter.